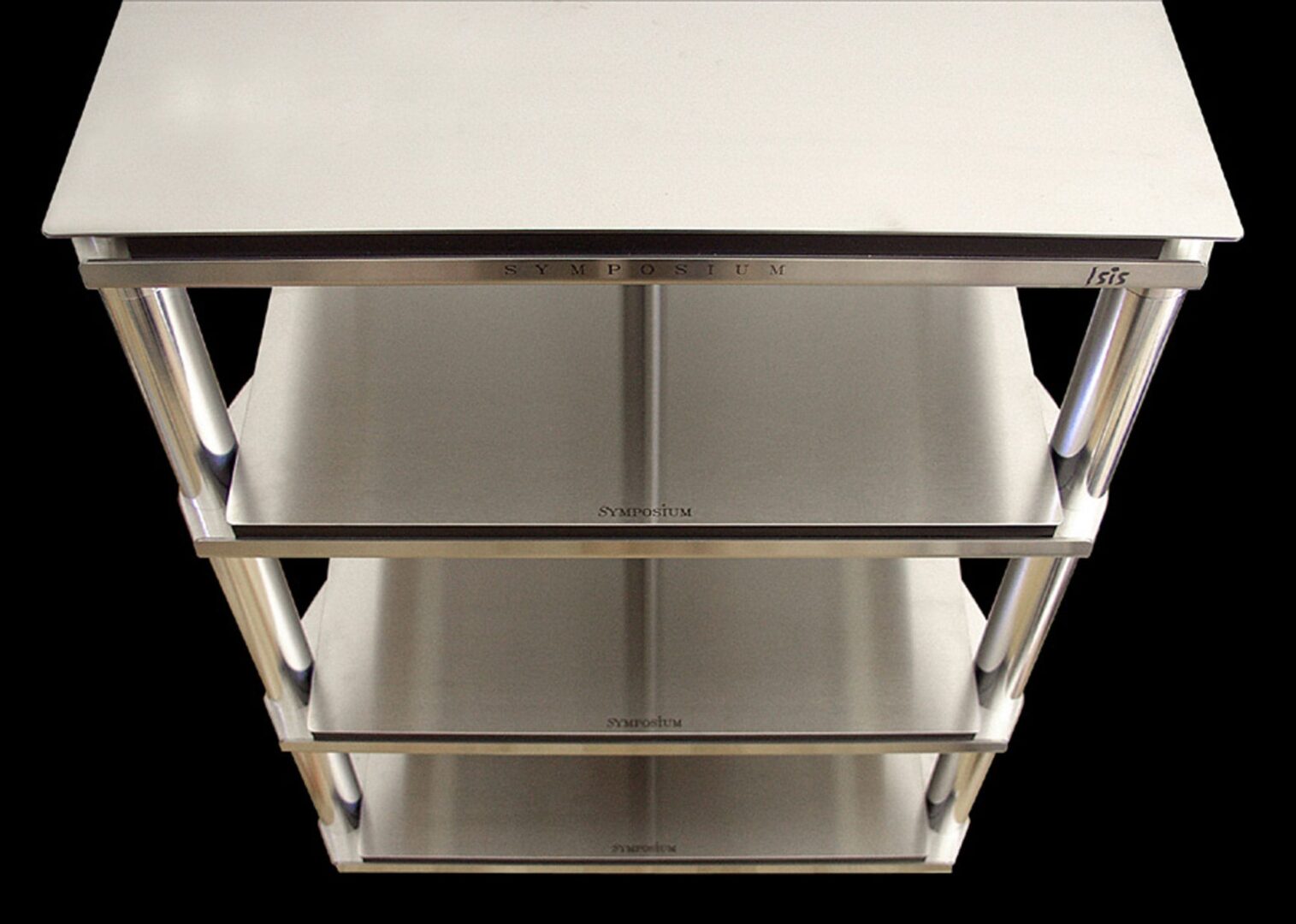 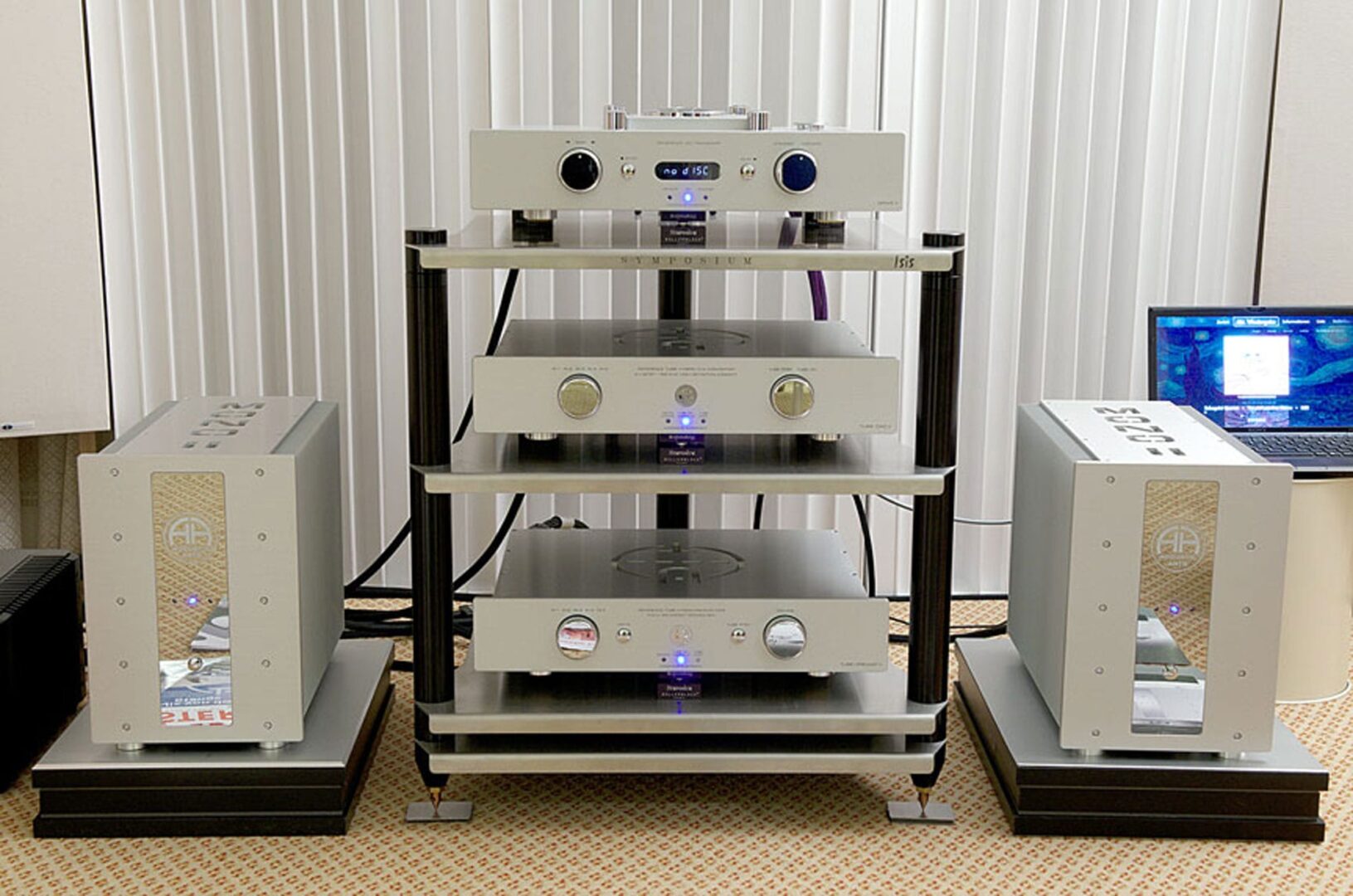 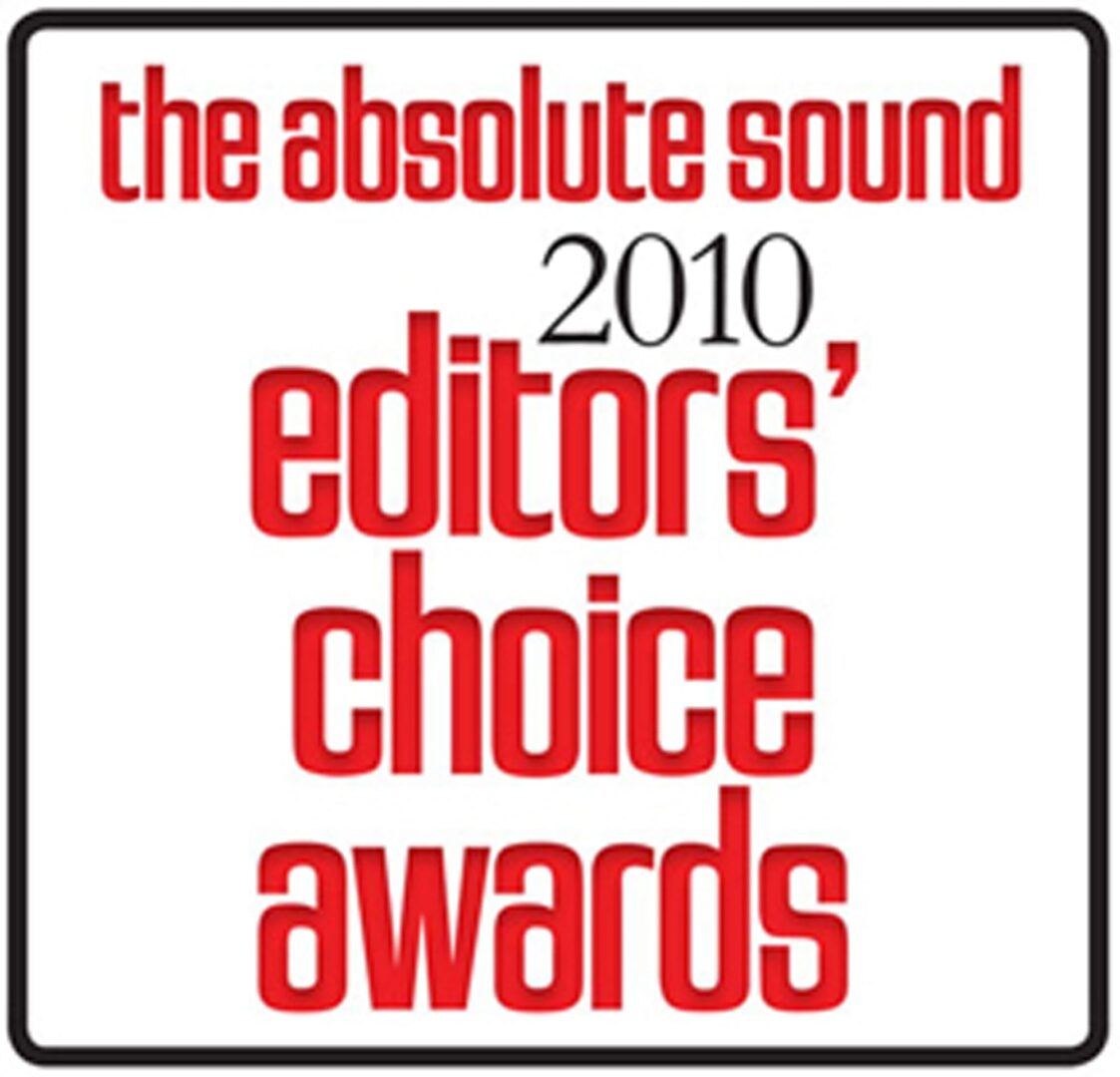 "···At the end of the decade I got the chance to try Peter Bizlewicz's outstanding Symposium Acoustics Isis Rack, which in its pioneering use of aircraft-aluminum cups and tungsten carbide balls, introduced a new element to resonance control - roller bearings. By using constrained-layer-damped shelves in a beautifully machined aluminum rack, with both the shelves themselves and the struts on which the shelves sit separated from one another by roller bearings, Symposium's Isis did not just turn resonant energy more efficiently into heat; it also seemed to more effectively drain that energy away without feeding it (or select parts of it) back into the items sitting n the shelves. I say this because, in the listening, there was a marked increase in neutrality and transparency when the components were seated on the Symposium stand. It was as if the sonic presentation were "deburred" - little areas of tonal, textural, and dynamic roughness (what I assume were little resonant peaks) were smoothed down into uniformity. The presentation might have been just a touch "politer" dynamically than it was via, oh, the Walker Proscenium rack (although nowhere near as polite as it was with Critical Mass' first stands), but it was also much smoother and more neutral in balance and much more subtly detailed, with absolutely top-notch resolution of very-low-level detail and superior isolation from footfalls. (I still use the Symposium Acoustics Isis rack and recommend it)." 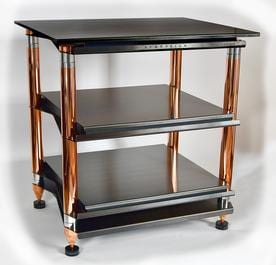 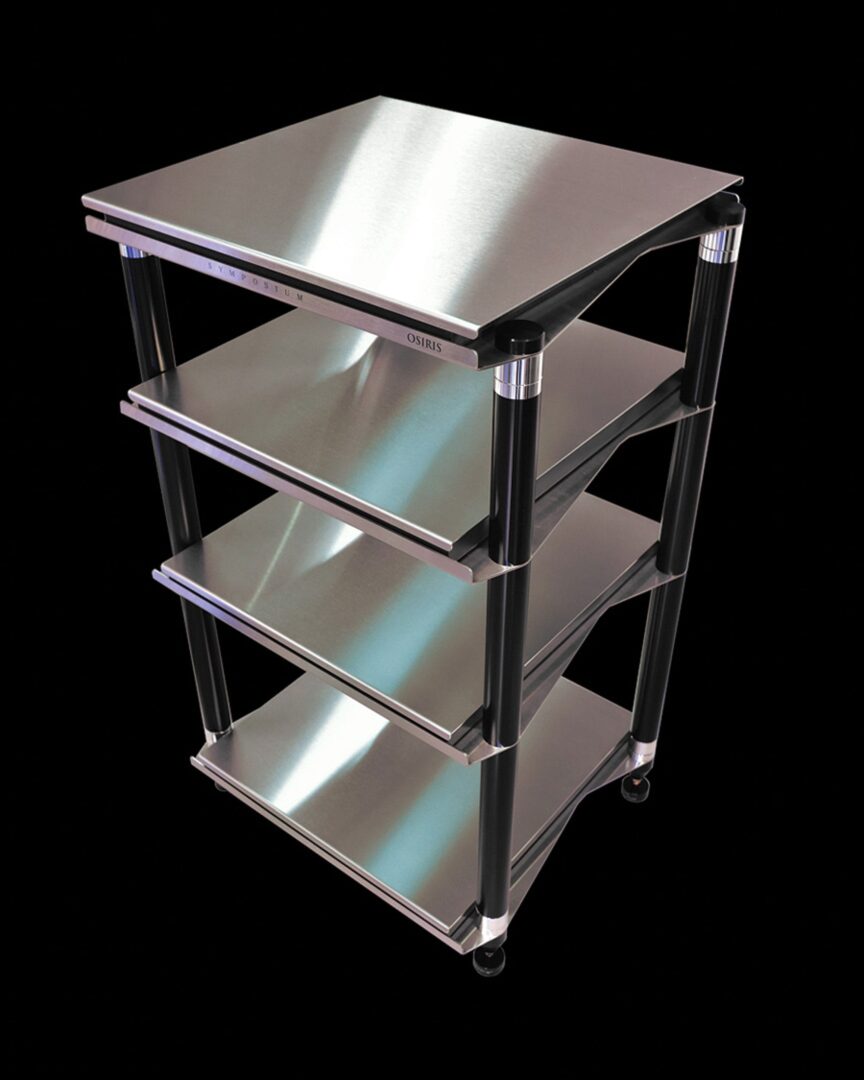 "Prior to the Osiris Stealth Ultimate's arrival, I'd expected that it would improve the sound of my system more than my Standard Symposium had -- I just wasn't prepared for the degree of improvement...The Osiris Stealth Ultimate makes fools of audiophiles (like me) who continually upgrade components in search of better performance, never knowing what those components are capable of. Sonically and aesthetically, it takes a back seat to no competitor I have heard or seen, regardless of cost..."

Performance Above and Beyond

The Xtremes are impressively the largest speakers of the Ultimate Series.They are equipped with 13 Venture drivers, consisting of one 2”dynamic AGC tweeter, two 5”CFGC midrange drivers, four 7” CFGC underhung midrange drivers and six 9” CFGC bass drivers on the side panels. The concept of mounting the 9” bass drivers on the side panels ensures that there is superb coherence in the very low bass registers that eliminates the necessity of separate bass towers. Bass towers bring the complications of locating two more speakers in the listening room to achieve both phase continuity and eliminating bass reflection peaks and valleys at the listening position. Thus, the Xtremes can produce extremely powerful and well-detailed bass and has excellent definition with clearly defined transients and details.

​The Reference Of The Ultimate Series

​The Reference Of The Ultimate Series

The Ultimate Reference is a true reference speaker in every way with its very unique 7” CFGC underhung midrange driver, producing spectacular sound clarity, natural tones and resolution of detail that engages the listener like no other. Its large 9” bass drivers are capable of bone crushing bass with powerful impact with subtle overtones and they can down to 20 Hz with ease and superb focus.The frequency response of the tweeter extends up to 60 KHz. The crossover frequencies for the Ultimate References are 3000 Hz and 400 Hz.The Ultimate Reference is a big speaker, but it is not overwhelming in size. In spite of the size of this speaker, it can image with pin point accuracy enhanced by a very low noise floor. The speed of all the drivers will astound with a dynamic range that reaches real levels of impact at the peaks of music. Overall, the Ultimate Reference is a very natural sounding speaker with excellent micro-dynamics, resolution of detail and spectacular realism.

The Grand Ultimate is truly a wonderful sounding speaker that broke the ground for all the rest of the floorstanding speakers in the Ultimate Series, it will out resolve any other speaker on the market while eliminating all manner of inherent distortion with its Venture drivers. Now it has been upgraded to the Grand Ultimate MK II, getting bigger in size and being equipped with the latest 7" CFGC underhung midrange, as used in the Xtreme and Ultimate Reference speakers. The crossover has also been updated with better quality components to improve the microdynamics for better live performance. The smallest changes in pitch and overtone structure can be heard, convincing that real voices and instrumental sounds are actually there.

Star of the Ultimate Series

The Ultimate speaker is a Star because it combines outstanding performance with a reasonable price tag. The Star uses all Abaca based graphite composite drivers (AGC) with the elegant C cabinet shape and a new crossover design. The result is a speaker that is pitch perfect over the whole bandwidth with incredibly resolved tonal structures. The sound stage is large with a seemingly nonexistent noise floor and tightly focused images that can stand completely alone without any hint of inter-modulation between them. The three Graphite Composite woofers utilize a newly designed voice coil that is responsible for bass that is powerful, very well resolved and reaches down to subterranean levels. The whole combination of the 3 Abaca Graphite drivers delivers a rich natural sound that is coherent and beautifully believable

There is always more...

The ENCORE gives you the traditional VENTURE command performance sound with a beautifully rich yet realistic sound. The Encore speakers are equipped with the new 1.5" AGC tweeter, one 5" CFGC midrange driver and two 7" AGC woofers. This complement of super high performance drivers will bring you the joy of real sounding music that will continue to put a smile of the face! The cabinet is a sleep V-shape cabinet design, that has been the signature of previous Venture floorstanding speakers. This is a cibinet that will become a wonderful piece of furniture art that lights up your home.

The 2-Way charm of the Ultimate Series

One of the most successful speakers, La Charme, still very much loved by her owners since 1990, gets reinvented and the ULTIMATE CHARM is born. Incorporating the new VENTURE driver technology, the Ultimate Charm brings more improvements to the macro -and micro dynamics never experienced before and is truly a jewel amongst all two-way design speakers. The VENTURE tradition of first order 6dB/Octave networks have been implemented with the latest upgraded components to give a superior impulse and ideal power response. All these meticulously innovations result in an exceptional musicality, a rock-solid image focus and a smooth response over a wide sweet spot.

The way of listening

Venture is proud to introduce the latest 2013 innovation, the VICI. The speaker towers are equipped with the new VENTURE 4" underhung woofer-midrange AGC (Abaca Graphite Composite) design, that forms a smooth transition with the 2" AGC tweeter. As all VENTURE speakers, it is using first order crossover design. Besides as a 2.1 system design (with the AW500 included), the VICI has also an option to be extended to a 2.2 design with an additional second AW500. On top, the VICI can also be used in a multichannel system, such as Home Theatre or Multichannel Audio System. The additional rear speaker will be coming out soon. The compact an elegant cabinet design of the VICI, veneered with Ebony finish and side panels in Piano Black, makes a beautiful piece of furniture, easily complimenting the living room, while enjoying its live performance in an impressive soundstage. Chosen as best sound at New York Audio AV Show 2013:enjoythemusic.com - report on NY AV show 2013.

The way of listening.

VENTURE continues to expand the innovation of the VICI with the addition of the VIDI speakers, the lastest new 3-way system compact loudspeaker design. The VIDI consists of one 2" tweeter, two 4" underhung midranges and two newly designed 7" woofers, all using the AGC (Abaca Graphite Composite) cones, creating a beautiful and coherent sound. The linear impedance and phase make the VIDI easy to drive by any amplifier, whether solid stage or vacuum tube designed. The compact and elegant design of the VIDI, VICI and AW500 easily complement any living room. All boast veneered cabinets in ebony finish and side panels in Piano Black. Their finishing are matched with impressive soundstaging, superior imaging and excellent detailing, the VENTURE's live performance trademark.