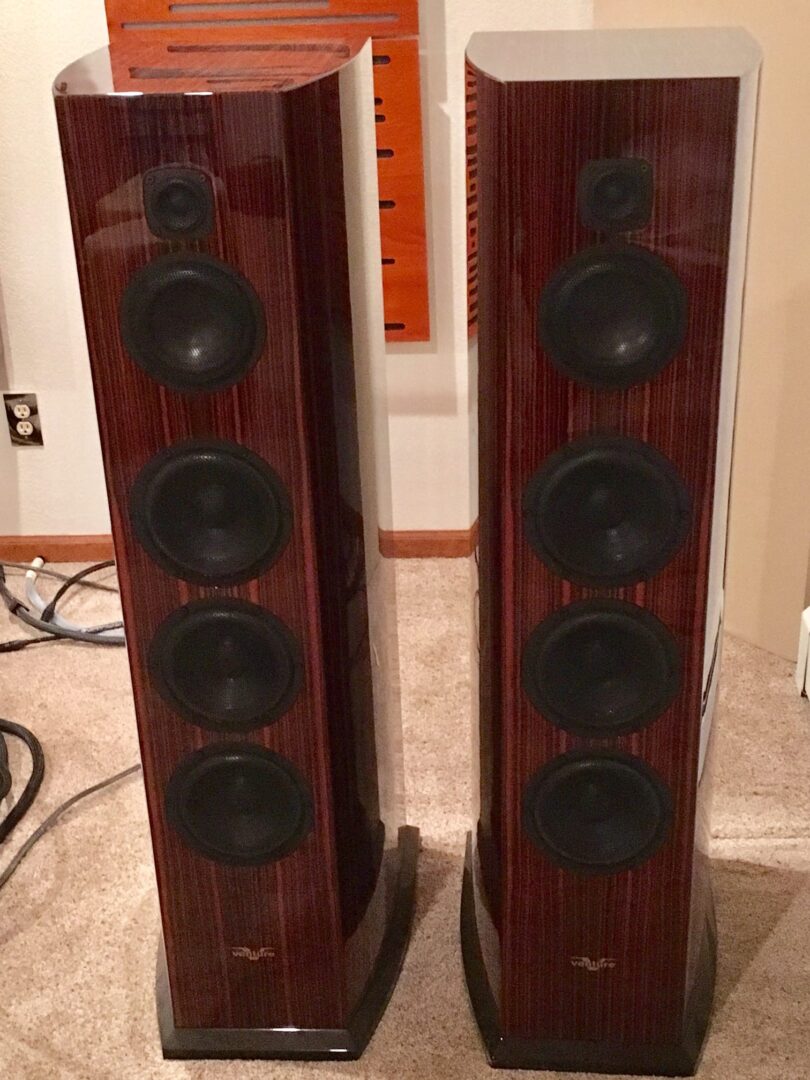 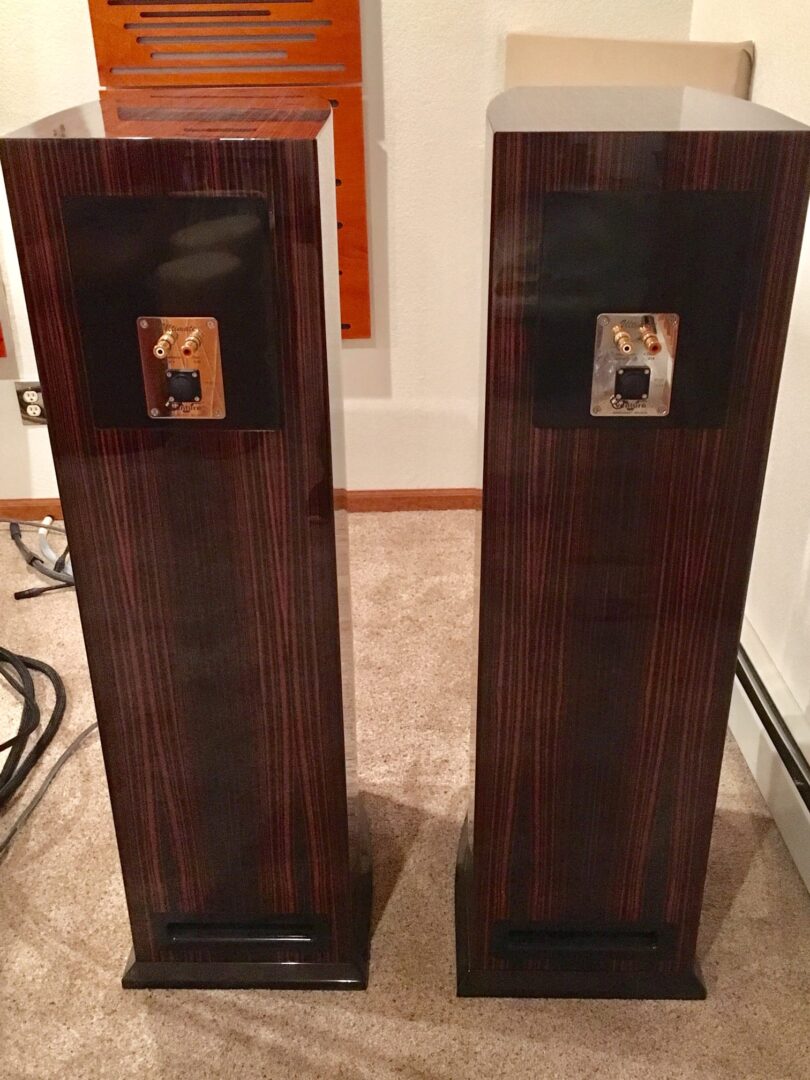 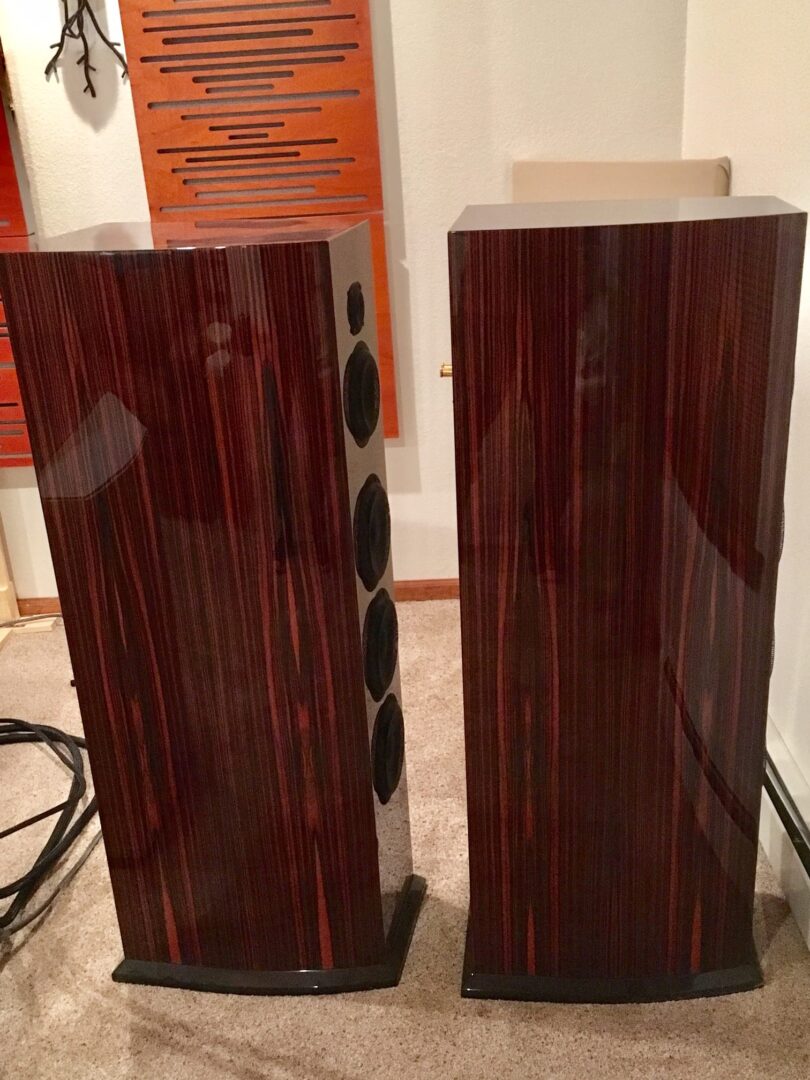 (Demo) These Venture Audio Ultimate Loudspeakers are Venture's latest model, and they are in immaculate condition! The speakers have amazing sound and are pitch perfect over the whole band-with with incredible tonality. They are manufactured in Belgium with cabinets of Makasar ebony veneer. Venture speakers have received numerous "Best of Show Awards" over the past few years.

The Venture Ultimate speakers combine outstanding performance with a reasonable price tag. It uses all Abaca based graphite composite drivers (AGC) with an elegant C cabinet shape and a new crossover design. The sound stage is large with a seemingly nonexistent noise floor and tightly focused images that can stand completely alone without any hint of inter-modulation between them. The three Graphite Composite woofers utilize a newly designed voice coil that is responsible for bass that is powerful, very well resolved and reaches down to subterranean levels. The whole combination of the 3 Abaca Graphite drivers delivers a rich natural sound that is coherent and beautifully believable 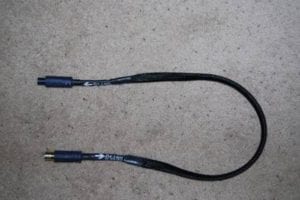 (Demo) Enkein Orion, one (1) meter XLR Digital cable for sale - The Orion AES/SPDIF digital ultra-high performance cable is specifically designed to conduct a digital signal through a cable with BNC, RCA, or XLR terminations. Incorporating solid silver conductors supported in an air tube suspension with a mechanical vibration dampening system reduces jitter and wander. The shielding of the Orion cable is a multi-layer thin film design. This approach shields the signal from high frequency EMI present in the environment. The overall design exceeds the interface specification, resulting in less DAC interpolation and increasing the accuracy of the recreated analog signal. 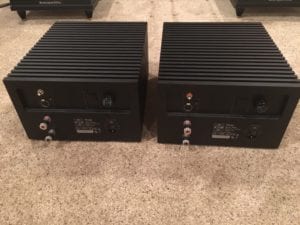 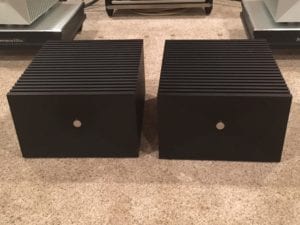 (Demo) These Teres Amps are based on the architecture of Spartacus. Single ended tube input stage loaded with a phase splitting transformer controlling 2 separate single ended amplifiers out of phase for output. Tube clarity and tone with might and power. Unusual but true..

​The output stages power JFET cascodes form a bridge that when unbalanced by the input signal via the 2 transformer windings restores balance by adjusting their current conduction through the load. The 2 output stages actually enclose the load in their control loops and try to correct each others errors reducing the distortion to negligible amounts. Leaving only the “character” of the input stage.

To reduce the amount of heat generated the amplifier is biased so only the first few watts are in true class A. Music has a crest factor of 10 on average. This means that most of the time we listen with 1/10th of the peak levels. For most users this translates to under 5W. Peaks could reach over 100 watts during playback, but only for few milliseconds. For those peaks the amplifier switches to class B using only one leg of the output stage capable to deliver up to 250W/8ohm and 350w/4ohm.

Not sharing a common reference point apart from the load itself makes the second leg correct for any error produced by the first one. Result is an amplifier capable of extreme power wile delivering exquisite smoothness and low level resolution.

The driver stage is isolated by the interstage transformer and is not influenced in any way by the output stage maintaining tone colour and resolution at all powers and loads.

​Having the output stages floating around the load prompted for the use of a unique biasing technique powered by solar cells. This was the quietest galvanically isolated power we could come up with. Using opto-electrical conversion we control the bias by adjusting light intensity in the control circuit.

Teres is an example of modern technology solving age old problems allowing us to go a step beyond.

The physical appearance of Teres is typical Thrax understated elegance. Exquisite finishing ads to the presentation of a solid block of metal like a bigger brother of Heros.

This Maximinus DAC uses a concept called R2R ladder. This is a resistor matrix that is switched for the various output levels outputting a fraction of an internal reference (much like a volume control). There is a suite of algorithms that apply digital filtering and up sampling to the incoming data stream. After processing a 16bit 44.1kHz CD data stream it is converted to 32bit 352.8kHZ data fed directly to the DAC. This greatly improves low-level resolution and the sense of space. The process is all user controllable and defeatable for purist and non-oversampling use.
We use a transformer matching the impedance of the converter resistors to the outside world and isolating them from external influence. We use transformer or optical decoupling of all inputs and outputs, meaning that contaminated round connection and other interfering signals don't make it to the inside of the unit. Each block in the DAC: the Converters, Clock, DSP and Control logic have floating ground planes and our unique constant current regulator technology. Then the whole assembly is mounted in a solid aluminum case for vibration damping and EMI/RFI screening following the same construction concept as our preamplifiers.
It's a different league from all currently available high end DAC's hence the name of a Roman Emperor.